Whoop whoop! Pull over… that NYAK is too fat! Rapper Trina and NYAK Cognac collab for new Peach and Cinnamon FIYAH flavors.

“I am proud to announce the next phase of my partnership with NYAK Cognac – I won’t just be the face of Peach and Cinnamon, I’m invested in this,” says rapper, Trina. “The release of the peach and cinnamon are synonymous with my lifestyle and music – which can be both sweet and spicy – so it’s a great tie-in.” She concluded, “I’m excited and am looking forward to the next phase of my partnership with NYAK, which will allow everyone to truly experience this black-owned brand firsthand.”

NYAK Cognac Founder Dennis McKinley has this to say about the collab, “Trina is an artist who has established herself as a relevant female force in both music and business. She’s one of the most consistent female rappers, who is well respected by both fans and peers alike.”

To spread the word about the new NYAK Cognac Peach and Cinnamon FIYAH flavors, Trina has been promoting the collab via her social media platforms and will soon embark on a campaign tour of liquor store signings, event activations, social media competitions, and brand alliances. 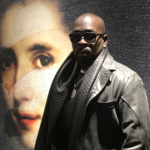