Faceless, but well recognized through the faces of his “Ghouls”, Ethiopian Street Artist, Lami is making his mark in and on Philadelphia

The mixed-media street artist from Ethiopia, Lami leaves his mark all over the city of Philadelphia. Last week, he joined other creative souls being showcased at the Tiny Room for Elephants Festival.

Tiny Room for Elephants is a festival curated to bring a community of artists, brands and consumers together. Founded in 2018, it has grown over the last few years from being completely underground to becoming more public-facing; with this year’s event being an all-out extravaganza of creative expression. It is great for both the evolution of Tiny Room for Elephants and the creators involved. Tiny Room for Elephants personally invites different artists from all different backgrounds to be a part of the festival so to an artist, this is a pretty big deal.

Lami was one of the artists personally invited to be a part of Tiny Room for Elephants and you can find that his artwork is also right across the street from Cherry Street Pier, where the festival was held. With distinct “Ghouls” all over the city, Lami could not have been overlooked. It was a must that Philadelphia knows more about who he is.

“You should never overlook anyone you meet or come across,” Lami stated. “You can lose out on a lot.”

We all have so much to offer, we’re all more than what meets the eye. The festival does an amazing job shedding light on introducing and connecting creatives from all walks of life.

Many people are familiar with Lami’s work before they know who he is, or what he looks like. After all, as a street artist, he doesn’t necessarily want to be seen. Lami prefers to be incognito due to the nature of his work. But he still strives to be his truest self in everything he does. He wants to be seen for what he stands for. Art is Lami’s means of expression.

Lami came to the U.S. barely speaking English and used art as a way to communicate. He speaks through his art in many ways in different mediums. Lami shares with us that his “Ghouls” tell stories of real people and experiences he’s faced.

With time, Lami sees himself transitioning to doing more commission-based projects, as well as eventually releasing a series of comic books, toys and figurines featuring his Ghouls. He often drops art and merchandise on his website.

See more of Lami and his “Ghouls” by following him on social media. 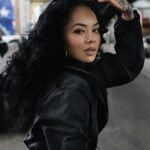 look//Faceless, but well recognized through the fa

explore//The Giraffe Encounter at the @philadelphi

dM: National Ice Cream Day in Philly + more for yo